Illegal hunting this year in the Catskills (Nov 2021)

Illegal hunting this year in the Catskills (Nov 2021)

Illegal Take of 10-Point Buck - Greene County
On Nov. 2, ECO Palmateer received an anonymous tip about a subject shooting a deer in the town of Catskill. In response, the ECO interviewed the hunter who admitted to shooting the 10-point-buck in the woods next to his house. The hunter showed Officer Palmateer the untagged deer hanging in his garage and Palmateer noticed a kernel of corn in the gut pile of the deer in a garbage can nearby. The Officer requested to be shown the location where the deer was shot and noticed a feeder with corn attached to a nearby tree, in addition to a large bin of pears in the hunter's driveway used to feed deer. ECO Palmateer seized the deer and the hunter's tag and ticketed him for unlawful feeding of whitetail deer, hunting deer with the aid of a pre-established bait pile, failure to tag deer as required, and the illegal take of whitetail deer. The venison was donated to the Venison Donation Coalition. 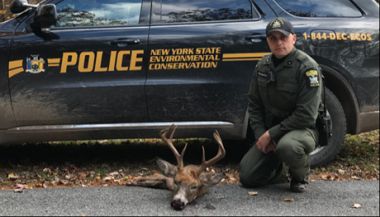 Illegally Harvested Black Bear - Greene County
On Nov. 20, ECO Smith received a call from a concerned hunter in the town of Lexington regarding an illegally harvested black bear. The hunter was afield for the opening morning of the regular season for the Southern Zone and witnessed a sow with three cubs descending the mountain through his property. He contacted the other members of his hunting party to advise them it is illegal to harvest a bear from a group in the Southern Zone. Shortly after texting his hunting party he heard four shots from an adjacent property in the direction the bears were travelling. The hunter later located evidence of an animal being harvested and contacted ECO Smith. ECOs Smith and Palmateer responded to the location to investigate and collect evidence, including photos, video, and witness statements. After interviewing nearby residents, the ECOs located the sow bear carcass at a residence in Prattsville. The individual that harvested the bear admitted to taking the sow and was issued appearance tickets returnable in the town of Lexington Court. The bear was seized as evidence and the meat donated. 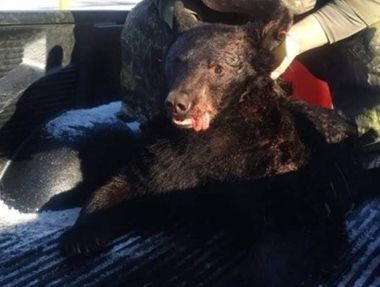 Bait Camp Busted - Greene County
On Nov. 21, Greene County ECOs busted a baited hunting camp in the town of Hunter after receiving tips one week before opening day of the rifle season. Acting on the tips, ECO Palmateer and Investigator Sulkey surveilled the property and found piles of corn at multiple locations. On opening morning, ECOs Palmateer, Smith, and Investigator Sulkey entered the property and found three different subjects hunting over large piles of corn. After further investigation, the Officers discovered a fourth hunter had shot a black bear on the same property. The ECOs found the bear lying un-tagged approximately 10 yards from the bait. The Officers seized the bear and ticketed the shooter for hunting with the aid of bait, failing to tag as required, and illegally taking black bear. The three other hunters were ticketed for hunting with the aid of pre-established bait. 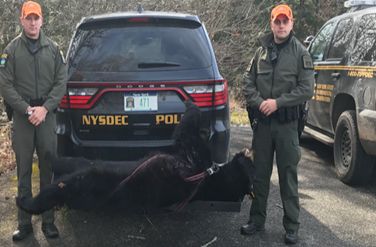 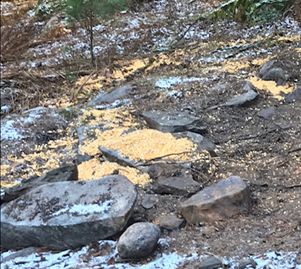 First Confirmed EHD Survivor - Greene County
During the late summer and early fall, an outbreak of Epizootic Hemorrhagic Disease (EHD) led to the death of a significant number of whitetail deer in parts of New York. On Nov. 2, ECO Palmateer received information from a Catskill family about a youth hunter who arrowed a buck with deformities on its hooves. The family reported that it looked like the hooves were starting to detach from the deer. The ECO spoke with DEC Wildlife Pathologist Kevin Hynes, who advised that these symptoms are historically indicative of deer that has survived the EHD virus. Hynes requested the deer be brought in for testing and the family donated the deer and gut pile to DEC. ECO Palmateer transported the deer to the Wildlife Health Unit in Delmar, where staff tested the spleen and hooves and found the presence of the EHD virus in both. This is the first deer in New York State to be confirmed as an EHD survivor. For more information on EHD, visit the DEC website. 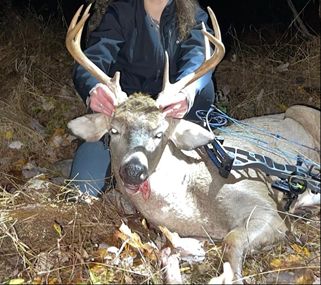