I am actually taking a GIS(geographic information systems) class as part of my environmental science education, and will be compiling data of anecdotal Cougar sightings, evidence proven cougar sightings, and previous data from studies about possible habitats in NY State. Hopefully I'll be able to generate a nifty interpolated map by the end of May sometime, I'll post it to this site if I have no copyright issues. =)

After that, if I can say with any probability that I've narrowed down the possible sites for cougar habitation in the state, I might go out and do some investigations. First however, I'd like to just collect as much data as I can.

Thanks for the coordinate!
Hike today, work tomorrow.
Top

Jon, that is great since those following sightings will only now document "confirmed" sightings. Mine was not confirmed. I would pay a lot to hear about what happened to the dead mountain lion (cub probably) that I saw in November on the left side of southbound I-81 soon after the Whitney Point exit. I was sure I would hear from truckers or hunters about seeing it too but I have heard nothing. It is frustrating! I don't doubt what I saw but would welcome firm confirmation. Give someone else reported having seen one at that same spot in May, I bet there was a adult and young one at that spot. The one I saw would probably have been too small to be seen standing on the rocks in May. Good luck!
Top

Some cats get rather large, and can be redish looking. Bobcats? Maine coone cats?
I dunno, without stopping and getting DNA or tracks or some other biological evidence It's hard to say with any certainty that it was a mountain lion.

Also you describe stripes, like a raccoon, however mtn lions will usually have black accented features and spots. With black around the nose and brows, and spots until they mature a bit. After they get to almost full size the spots will start to fade it seems. 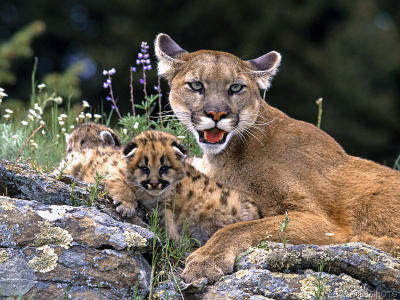 So if you saw a "cub" was it spotted? And how red was it? Some mtn lions can be darker, but will mostly be light colored on the bottom, and darker on the top toward the spine.

bobcats are also reddish, and can have a combination of spots and stripping patterns such as here:

Bobcats can definitely be the size of mountain lion cubs. Some small bobcats are about as large as my parent's Maine Coon. You say it has a long bushy tail, and raccoon pattern, that makes me think of my parent's giant Maine Coon.

Nothing says it can't be just a large domestic cat that might have looked cute like a cub.
Domestic cats can seem veeeeery ferocious, and can be easily confused with wild animals.

Hi Jon. No I did not mean stripes. The face of the cat had markings that led me to think of a raccoon so I think that was because of the dark markings on the face-that the cubs have I think this was a mid age cub-not tiny but not full grown. A lot like the one that is at a zoo right now and shown on the news (contest to name it) but bigger and with a long rope like tail that curved around, cleared the legs in a semi-circle so there was pavement/gravel between the legs and tail-the legs may have been in a contracted position (as in bent rather than extended) but the tail went to the mid torso --rope like and not tapered at all.
Top

Based on the similarity between what I saw and the mountain lion cub at the local zoo, I would say what I saw was a 7-9 month old mountain lion cub. I am betting there is a female in the Whitney Point NY area as the one I saw would have been too small to see in May if it were standing on the rocks as described by the person who saw one in the same spot in May.
Top

We had a sighting of a Cougar with a young Cub last year in Oak Hill, NY. Maybe the same one?
Top

Mike, when last year?My sighting was in November 2011 and someone else saw an older one in May 2011 --both Whitney point, ny about 107 miles from Oak Hill NY
Top

I didn't see them. Someone else did. But, it was last summer. 107 miles isn't far for a cougar. They can easily move 50 miles in one day.
Top

I think you all will think I'm crazy but I seen one in NJ.My dog was going crazy at the back door,I thought it was a bear because we live in the vicinity of a state park,it actually surrounds my house,Anyway when I turned on the back light the cat was walking up the back of my yard.I flipped ran outside still in my drawers and followed that sucker in my truck because I couldn't believe my eyes.He slicked into the woods and I shined the lights on him.He just lay there looking at me licking his lips.It was not a bobcat or any other cat but a mountain lion.I told the story at work the next day and I've been getting ribbed until a local newspaper ran a front page story of a mountain lion and cubs living near another house in Vernon nj,mysteriously they vanished within a couple of weeks.The state will never admit that there's mountain lions no state will for that matter.Either there passing through or setting up camp,know one will say.BUT I SEEN ONE.
Top

well that's something new.
you have a coordinate for me?
Hike today, work tomorrow.
Top
Post Reply
42 posts