On June 19, 2011 Mountain Lion prints were discovered on the side of a private dirt road in Acra, New York. The prints are 4-1/8" wide. A deer stepped on the back of the print. Deer spend a lot of time in this area. There was only one track found. The area has hard dirt/rocks, so prints would not show up easily. This print was found in the mud. In person, the print was very clear and evident. But, in the image it doesn't seem so obvious once photographed.

It should be noted that a mountain lion and a cub were seen last year less then 10 miles from this track. There was no pictures of this source, so it has not be published. Another sighting was seen in East Windham last year crossing Rt 23. 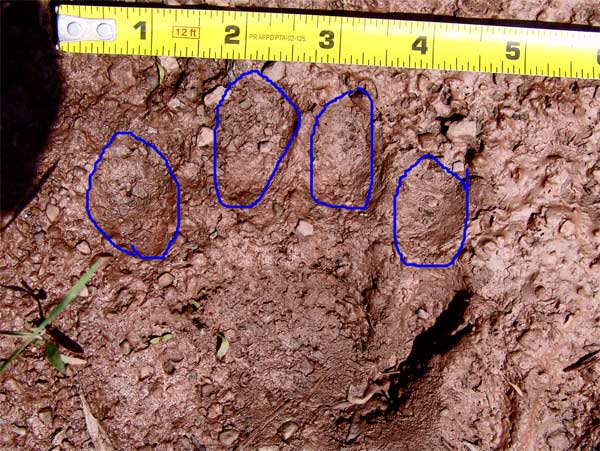 I hesitate to even mention our sightings since we were not taken seriously at the time...

I found this forum a couple months ago while doing some research. I expected to find that
the mnt lion issue had been solved and proven by now. Or, i had expected to have collected some
proof. I do have some scat and have bookmarked all of my recent research and where i may send it.

We are in Jewett.
Three of us saw him over a 2 week timeframe and determined it was a juvenile male. 2 of our acres
are cliff rock with cave-like overhangs. Two tiers reaching 1-2 stories each. Our dwelling is three season,
woodstove only, spring fed. An area below Windham that is not very populated. This was late Aug-sept
of '94. We had been out of the country all summer and the first soak in the woodfired hot-tub, tucked
up on a ledge behind our barn, we heard some threatening screams not too far above us. Again the next
night and thought of many things it could have been, but one session it screamed and seconds later it was
much further away...Not until we actually saw him did we realize what it could have been.

My brother-in-law visiting from the pacific NW stepped out for an early pee and, after hearing our story,
immediately look up to the ledge above the tub..."wholly toledo!" (a school teacher. I used stronger expletives)
Unmistakable identification when you are face-to-face 10 yards away...

About 60lbs at that time and clearly young and confused about our recent presence. If still in the area he is mature
and a sighting is nearly impossible. Have considered a motion activated camera.

Just another story that no one believes.

My recent concern is training a new puppy who looks like a lovely little goat. Pic of one of our cliffs with elder pup,
70 lbs, and the little goat pup.

This is similar to what we saw.
http://www.youtube.com/watch?v=aj7ZS-L- ... re=related
Top

As time goes on, there are more-and-more credible sightings. But, there has been a systematic denial by some who would like the whole situation to go away.
Top

In January 2009, my daughter and her boyfriend were driving toward Windham on Rt. 23 going west near South Durham at about 1:00 am. when a large cat with a long tail loped across the highway right in front of their car and ran up the mountain on the south side of the highway. They were very excited when they reached our house in Windham, and were sure that they had seen a mountain lion. They had a clear view of the cat in their headlights, and although it was a brief view, they saw that it was large, muscular and tan, with a long tail.
I called the NY environmental authorities the next day to report the possible sighting, but of course, there was little they could do and no way to verify it afterward.
Top

That is where these prints were taken from. We have had reports of a female and a cub in Oak Hill. Last year we also had reports of one crossing Rt 23 in East Windham. The DEC really doesn't want to hear about reports. Some believe that they are the ones who introduced them in 2001.
Top

I am virtually certain that the date was 1/2/09 - just after midnight. 2 1/2 years ago. A long New Years' weekend. Although I was not the eye-witness, I have never forgotten the excited conversation with my daughter and her boyfriend when they arrived at the house, which was 10-15 minutes after the incident. And they were sure of what they had seen.
Hard to believe that there is some type of conspiracy going on at the DEC. And it does now seem as if there has been confirmation that a mountain lion or mountain lions have traveled through the area recently. Either way, it is interesting to follow the possible sightings and confirmed reports such as in Connecticut, etc.
Top

We saw something resembling the cougar track in the mud on the Acra Loop Trail this past Saturday, 8/20. First we thought those were bear prints. Half a mile or so down the trail we saw another set of tracks like that -- but this time they looked like human bare-foot tracks.

When we got back to the hotel I looked up possible ways one might hike barefoot -- one is called "Vibram". I got excited about that idea, bought myself a pair at a shoe store in Woodstock on the way home. Love it.

When we got home I took my daughter out on a hike in a the woods by where we live and deliberately stepped in the mud to make a print -- and as expected I reproduced the prints we saw on the trail.

So, to further confuse the whole cougar foot prints issue if a human wearing Vibrams steps into mud with only front part of his foot the result is similar to a cougar print.
Top

I have a pair of big game hounds that I use on bears, bobcat, and raccoon in season. If anyone in the area sees a mountain lion, please notify me ASAP and I will turn my hounds out on the track. This would be a catch and release "hunt". My dogs would run the quarry up a tree and hold it there while the humans got a good look at it. No firearms involved. I do this with bears regularly and would love to see an eastern cougar!
JMO, but it is highly unlikely that there are any cougars/mountain lions in the Catskills. For interesting reading on the subject, go to
http://easterncougar.org/CougarNews/
http://www.easterncougar.org/pages/abou ... ougars.htm
or check out their listserv on Yahoo Groups:
http://groups.yahoo.com/group/eastern_m ... ssages?o=1
Top

Bear footprints look a lot like barefoot human footprints, and that area is lousy with bears. If you're hiking in an area like that, the bears have a tendency to mark the trail with scat. Most Catskill bears will back off if they have an escape route. Don't turn your back on them. If one acts confrontational, toss your pack or anything with food smells on it, and it will almost surely go for the pack rather than you...
I hunt bears with hounds, unarmed. We just chase them up trees. I have a special license from DEC to do it and they occasionally call me to chase nuisance bears. Don't ask--Its fun to get that close.
There are lots of hound hunters in NY state--I'm the hunting zone 4 representative to the NY Houndsmen Conservation Assoc. and write a column for them. My hounds will chase a bobcat. They hate cats. They would definitely chase a mountain lion if they got a whiff of one. Hound dogs do that all the time out west where lions are common. I don't know any houndsmen who've ever seen a mountain lion in state, but if any you see a fresh lion track, get in touch and we'll be right there, catch and release with camera.
Top
Post Reply
22 posts